WKU alumnus Jeremy Fox’s shock of purple hair stood out as he sat at a table with a fresh dye treatment in Starbucks. The loud color was accompanied by a quiet atmosphere, aside from a few neighboring tables of people talking over coffee. In the entire coffee shop, Fox was the only source of bright hair.

“It just feels more me,” Fox said. “It has kind of become part of my identity at this point.”

Although hair color is not always directly related to major life changes, experimenting with a personal look can make someone feel better about tough situations or their own image.

Fox had wanted to dye his hair for over a decade and finally started a year and a half ago when a friend of his encouraged him to do it. He said he had grown up in a conservative household, and he is now an agnostic atheist. Fox said both his religion change and hair color caused a negative reaction from his family.

Since purple is Fox’s favorite color, he has stuck with it as his dye choice as he experiments with hair styles. He has continued to dye his hair despite the controversy of it in his family.

“It was less for me and more to make people uncomfortable,” Fox said about dying his hair the first time.

In public, he said  strangers don’t share negative opinions with him about his hair. At most, he said he has gotten some interesting looks.

“It has caused some pretty fun interactions,” Fox said. 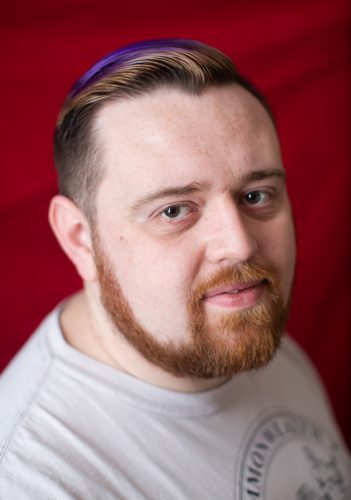 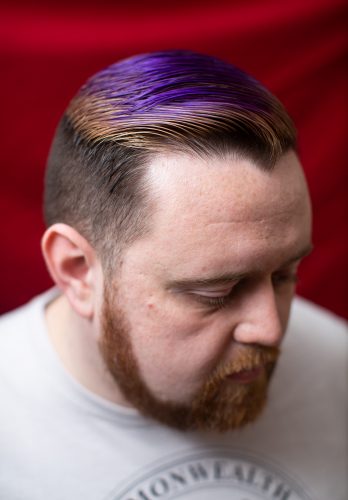 Jeremy Fox, a WKU alumnus from Dunmor, has his hair partially dyed purple which is his favorite color. He has previously had it all dyed, but it is currently just the very top of his hair. Fox said having his hair dyed has helped him deal with anxiety. “Interestingly enough, doing something that draws attention to myself relieves that,” he said.

He said he once noticed a 60 or 70-year-old woman staring at him at his grandparents’ retirement center in Florida. He expected her to criticize his color choice, but she ended up saying it was amazing. He said he has seen women residents at that retirement center dye their hair bubblegum pink or sky blue, so changes in hair color are not limited to age.

Fox said he initially put off coloring his hair since he had been afraid of the attention he might get. However, he said his hair color has actually helped him to deal with anxiety.

“Interestingly enough, doing something that draws attention to myself relieves that,” he said. “I’m less likely to wonder why someone glanced at me when they probably didn’t give me a second thought. They glanced at me because of my hair, and on I go.”

WKU alumna Andria Stafford dyed her hair bright pink in December 2017. She said she was going through a difficult time and had added the color before a breakup she was expecting.

“The funny thing is, I hated the color pink,” Stafford said. “I absolutely hated it.”

Still, she said she wanted to do something out of her comfort zone.

“I did the bright color hoping it would brighten up my life,” Stafford said.

She and her roommate went to Sally Beauty Supply to buy hair dye. Her roommate, who already had blue hair, helped Stafford with the process. Initially, Stafford had been expecting her hair to be a paler pink, but it turned out to be far brighter. She said she ended up liking it anyway and adjusted to it. 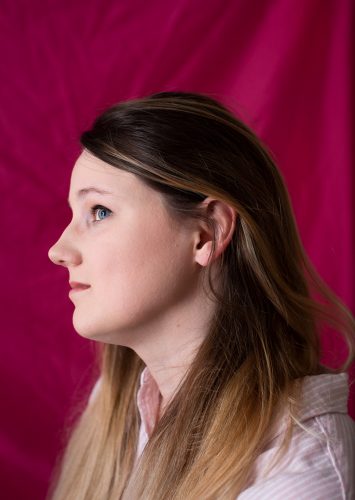 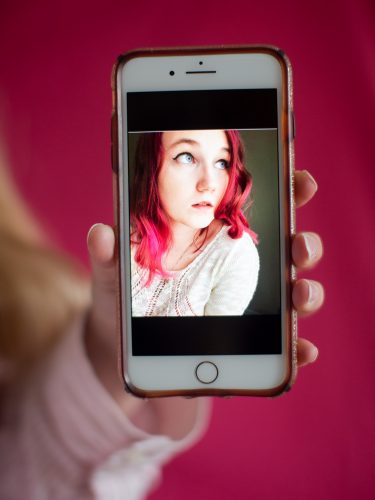 Andria Stafford, a WKU alumna from Franklin, dyed her hair bright pink in December 2017 during a difficult time in her life. Her hair is back to its natural color now, but she said she would like to have it pink again. “You’ve gotta learn to love yourself, because you’re going to be the only one left if someone leaves you or things fall through for the future,” she said.

She said her bold hair color made her feel special among the many students at WKU. The color change boosted her confidence.

A month later, another shift of events led her to allow the pink to fade. Stafford was working behind the register at Michaels that month when the store was robbed. She was not physically injured, but the experience changed how she felt about bright hair around that time.

“After that, I didn’t feel good about myself,” she said. “I felt violated. Instead of standing out and feeling special, I just kind of wanted to blend in, not be so much of a target.”

She said she didn’t go back on the register for about two months, and Michaels had an armed guard on duty when she returned to work.

“Now I’m a lot more comfortable with myself,” she said. “It was after that robbery that I learned that life is so short. What if something had happened to me?”

She said she began surrounding herself with people that support her and now works at a new job. Due to these changes, Stafford said coloring her hair is not a necessity in order to feel happier.

“You’ve gotta learn to love yourself, because you’re going to be the only one left if someone leaves you or things fall through for the future,” she said. “You need to be able to fix yourself. No matter how many times you dye your hair, it’s not going to make you feel the best about yourself that you could possibly feel.”

Stafford said she misses having pink hair, and she would consider dying it again, since she came to like the color pink.

Elizabethtown senior Alayni Hilton said she has been dying her hair since third grade. Currently, her hair is red after she grew it back in from shaving it for St. Baldrick’s Foundation, a non-profit that raises money for cancer. Hilton said she has always dyed her hair as a way of self-expression.

“There’s a spark, like I can do anything,” she said.

Hilton said she sees red as a form of power. She said this gives her a sense of self since she is graduating at the end of this semester and feels lost at times about an exact direction in her career. 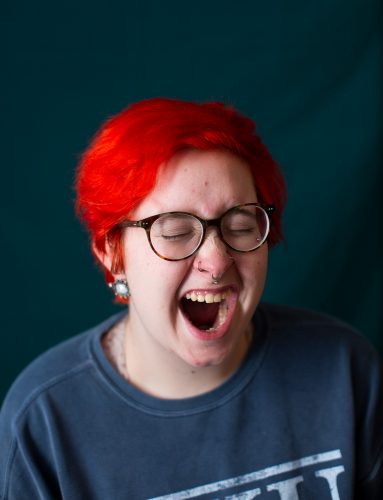 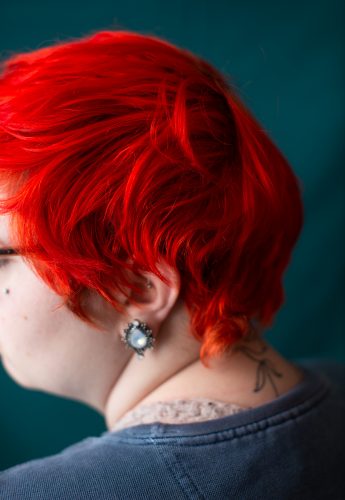 Alayni Hilton, a senior from Elizabethtown, has been dying her hair since elementary school. Hilton said she’s dyed her hair 20 different colors over the years. “There’s a spark, like I can do anything,” she said.

She generally dyes her hair on a whim, and she sees hair as something that can always grow back if she doesn’t like the result.

“I wanted to have fun and take things day-by-day,” she said.

She said she has felt like she isn’t always noticed in such a large group of students on campus, and hair dye helps this.

“I want to stand out, and I always feel like I’m hidden,” she said. “If you only remember me because my hair was red, that’s fine too.”

After college, Hilton hopes to work as an advocate for mental health issues or the LGBTQ community with her degree in diversity and community studies. She wants to use her hair color in her future work environment to show someone they can have a sense of freedom even if they are stressed out.

“If we can show that we can be our truly authentic selves, it can help people see they can do that too,” Hilton said.